ednmart
May 14 in Question and Answer

I am interested in trying to find the value of this milk bottle. 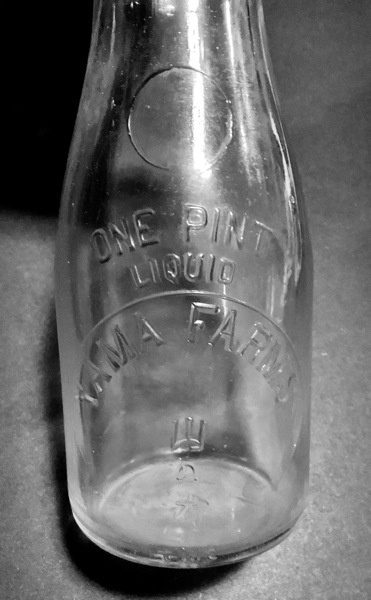 This is a One Pint Milk Bottle from Yama Farms. It is in excellent condition - it was from an estate in the Catskills - it was not dug.

It is a clear bottle with the embossed words- One Pint Liquid, and Yama Farms in an embossed circle with three Japanese symbols. It is translated as “Yama-no-uchi” or “Home in the Mountains” (sometimes translated as “Home Within the Mountains”). According to Yama Farms founder and owner Frank Seaman, this name was bestowed upon his property in Napanoch, New York by Marquis Ito Hirobumi, the first prime minister of Japan. It became the symbol of Yama Farms Inn,

The Yama Farms Inn - was open from 1913 to 1939 - was one of the most widely known resorts in the United States. Located in Napanoch NY in the foothills of the Catskill Mountains. It was owned by Frank Seaman, an advertising Executive, and friend of Thomas Edison.

This deluxe resort was open by invitation only. Frequented by J.P. Morgan - Henry Ford - George Eastman (of Kodak) - Nelson Rockefeller - John Burroughs - David Abercrombie - Ernest Seton - Firestone - and many other notable people of the era. The resort believed in nothing but the best for its guests and served them anything they wanted to eat at any hour - but it only served its own milk, from its own diary, as they believed it was the best available.